(New York) Project Veritas Action Fund has requested a criminal investigation by the US Department of Justice into the Bernie Sanders 2016 presidential campaign to determine if the Sanders campaign and the Australian Labor Party conspired to “defraud the U.S. government” and allowed “foreign national interference with U.S. elections.”

“Given the unusual breadth and depth of likely foreign involvement in America’s 2016 presidential election, we request a thorough criminal investigation of the matters described herein.

Barr goes on to point out that like this complaint about 13 foreign nationals assisting one federal campaign the Grand Jury in Washington DC recently indicted 13 Russians for interfering in a Federal election.*

Additionally, the former Speaker of the New Hampshire House of Representatives William O’Brien is sending a letter to the DOJ’s Public Integrity Section as well as the U.S. Attorney’s office in Concord, New Hampshire asking for an investigation. In his letter, the former Speaker requests an investigation into “additional potential criminal violations stemming from an apparent conspiracy to defraud the U.S. government.”

According to the Federal Election Campaign Act (FECA) as quoted in O’Brien’s letter: “[p]ersons who knowingly and willfully engage in these activities may be subject to an FEC enforcement action, criminal prosecution or both.”

This comes in the wake of the Sanders Campaign agreeing to pay a civil penalty of $14,500 to the Federal Election Commission for accepting “prohibited foreign contributions,” although the campaign agreed to do so “without admitting liability.”

The Project Veritas Action Fund 2016 videos that exposed the foreign collusion with the Sanders campaign initially got very little coverage from the mainstream media in the US, but were widely covered by the Australian Media. 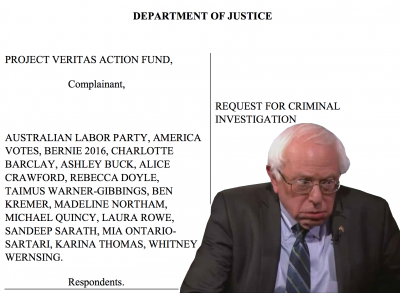 “Since CNN’s Van Jones thinks the Russian collusion story is a ‘nothing burger,’ here’s a JUICY story about a probable violation of the Foreign Agents Registration Act, a potential conspiracy and foreign collusion in support of a Presidential candidate that Van Jones can really sink his teeth into,” said Project Veritas Action Fund’s founder and President James O’Keefe.