(Des Moines, IA) In an earlier video, Project Veritas Action Fund exposed the radical left-wing views of an Iowa Field Organizer for the Bernie Sanders Presidential Campaign, Kyle Jurek. In this new video, Jurek is secretly recorded praising Gulags and speaking favorably about forcing Americans who oppose Sanders’ radical policies to be re-educated. Jurek, a self-described Anarcho-Communist, reveals that several of his colleagues are also farther left than the Democratic Socialism the campaign presents to the public. Jurek also implies that there are plenty of Antifa group members who are part of Sanders’ campaign, a group known for its violent actions in the streets across the United States. The recordings give insight into the mindset of many Sanders staffers and what they truly believe.

On several occasions, Jurek expressed his fringe views by suggesting that Americans with opposing viewpoints should be re-educated in Gulag-style camps or maybe even put to death:

“There’s a reason Joseph Stalin had Gulags, right? And actually, Gulags are a lot better than what the CIA has told us they were…”

“…So, that, that was the intention, of Gulags, right? not only to elim- like, remove, like people where were like insidious to the state from the state, right? Like “hey, you guys are all causing problems, you’re like, working against the revolution; we’re just going to remove you and put you in Siberia, where you learn the f*cking value of like being a comrade.” Like, and that’s what it has to be. Like our prisons, in the United States right now, are far worse. Far worse than anything that they experienced in a f*cking Gulag. Like people get raped. People get f*cking, work 12 hours a day. People have to go fight fires in California for a dollar. You know what I mean? That’s f*cked up. that’s super f*cked up. Soviet Union didn’t do that sh*t.”

“Yeah, you’re not gonna get Bernie to say “Gulags” but like, I’m all aboard for Gulags, like, I feel there needs to re-education for a significant portion of our society…I mean, but running for president in the United States you can’t say anything like that right?”

“…Putting them up against a wall. I mean the alternative, instead of trying to like…re-educate these people and put them back into society the only option is, the only other alternative is to f*cking *makes shooting gesture/noise* you know what I mean?” 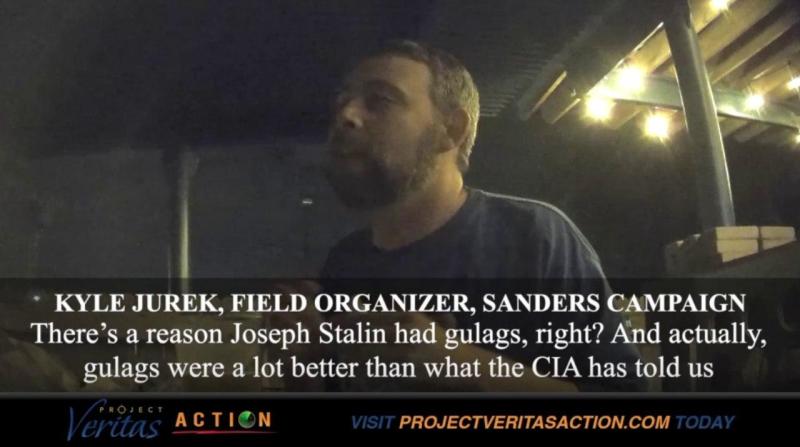 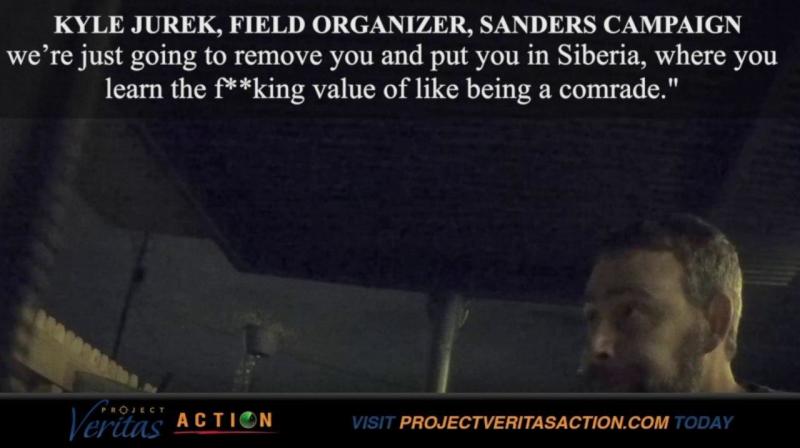 PVA journalists also asked Jurek about his involvement with violent groups such as Antifa, and what political ideologies he and his colleagues identify with. Below are some of the responses from Jurek:

JOURNALIST: “That’s just crazy, what that guy said. I mean I know we have a lot of the Communists, the Marxists on our side but…”

KYLE JUREK: “Yeah. In fact, there’s, that I know of, one two three… four, four of the organizers in this office are leftists, of some degree, further left than the Democratic Socialists.”

KYLE JUREK: “The degree varies but many of the organizers are, actually, I didn’t even count Justin, so Justin, me, Derek, Danielle, Jessica… we’re all further left than the Democratic Socialists.”

KYLE JUREK: “We’re all further left than the Democratic Socialists.”

JOURNALIST: “Yeah. What would you consider yourself? Like where on that spectrum…”

KYLE JUREK: “I’m an Anarcho-Communist. So, I’m as far to the left as you can possibly get.” 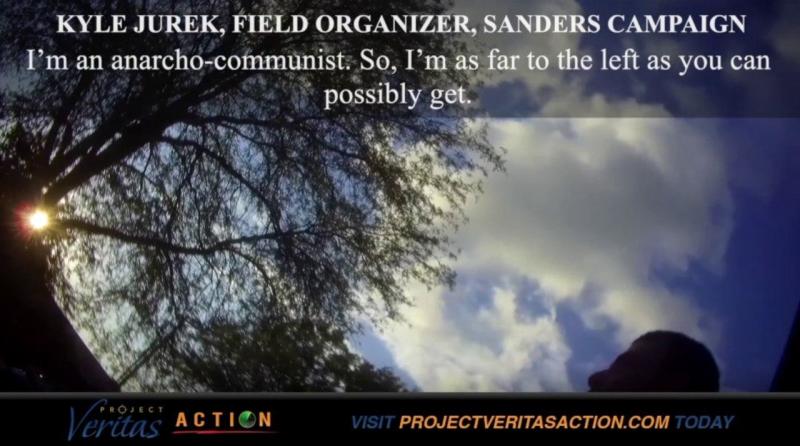 KYLE JUREK: “I mean the whole basis of Communism is like people and planet above property. Like we’re here to preserve the planet, to preserve people, right? We don’t want to have to, but if we f*cking, if people are going to try and fight back against the revolution, so when you hear about like atrocities committed in Cuba by like Fidel and Che, like killing people, those people who were actively like, they were like anti-revolution. They were fighting against the revolution. Like in any war, like you guys were in war, and you encounter people who were fighting against you, what did you do?”

KYLE JUREK: “Right.  Same thing holds true in a revolution. Right like you can’t abide people actively working against your f*cking revolution. Like you can give them a choice like hey, you can join the revolution, you cannot be a bootlicker, you could sit idly by and allow it to happen, but if you’re going to take up arms against the revolution, then you should expect a violent response. Right? Like it’s f*cking natural.”

JOURNALIST: “Fight or die. Yeah. That’s what they said in the Revolutionary War.”

KYLE JUREK: “Yeah, and that’s where we’re at right now. We’re at one of those moments in human history, we’re fighting for survival, we’re fighting for both survival of the entire human race, we’re fighting for the survival of living creatures on planet earth, and there’s some people who will stop at nothing to preserve that, right? Like to see, to see the human race continue into the future. Right? To try and save the planet from f*cking destruction. Like and no matter what country and what laws were, that exist, they’re irrelevant to, there are things greater than those systems, right?”

KYLE JUREK: “There are things that are more important than the rule of law in the United States, when it comes down to the existence of the human race.”

JOURNALIST: “So, I know you have an Antifa sticker on your laptop, have you ever done or been in any of those crazy…”

KYLE JUREK: “There was a couple things…events that they came to. They came to Lansing and Ann Arbor… I was there for those.”

JOURNALIST: “Did you ever like, help out or participate in any of it?”

KYLE JUREK: “Yeah, I mean, so, I didn’t help organize any of it, but I was there in support. I’ve yet to punch a Nazi, but I will, one day.”

JOURNALIST: “Are there Antifa people here?”

KYLE JUREK: “There are some here, a lot of them are probably on the Bernie campaign, but there is a DSA chapter here so like some of the DSA folks would probably… we’ve been looking for an action to like participate in…like in regard to immigration and ICE, we’ve been looking for something to pop off so we can f*cking pop right back off.” 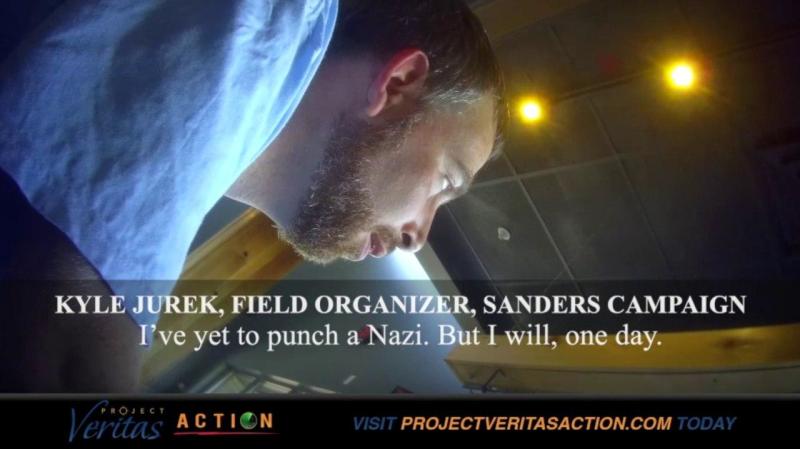 Since our report, we have received several anonymous tips from people who know Jurek. One from a campaign staffer, who says Sanders Iowa State Director Misty Rebik knew of Jurek’s radicalism and should have never hired him.

Even more disturbing is a tip from people who know Jurek personally. They say Jurek is dangerous and becoming more radicalized. They worry he might try to assassinate President Trump. Our General Counsel has reported this information to the US Secret Service.