(New York) The 2016 presidential campaign of US Senator Bernie Sanders has agreed to pay a $14,500 civil penalty to the FEC for foreign government election meddling, “without admitting liability.” This comes as a result of a complaint filed by former NH House Speaker Bill O’Brien regarding a Project Veritas Action hidden-camera video exposing the Australian Labor Party colluding with the Sanders campaign.

The video, which received wide-spread attention from Australian media outlets, initially received no coverage by any US mainstream outlets. (The “Russia-Trump collusion” narrative, on the other hand, has received nearly unprecedented media coverage.)

Nearly two years later, and the media seems to have caught on:

The video, released in 2016, showed Bernie Sanders staffers in New Hampshire and Nevada explaining that the Australian Labor Party used taxpayer dollars to send the staffers to help elect the Senator. According to the FEC agreement, this means the ALP made “prohibited foreign contributions” to the Sanders campaign.

“In separate agreements filed on Feb. 14, the FEC writes that by paying the youths’ transportation costs and stipends, the party made an illegal contribution to a U.S. political campaign and the Sanders campaign broke the law by accepting paid services by the Australians.” 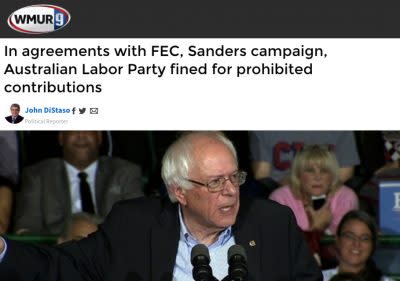 The “Not for Sale” candidate was known to complain about Hillary Clinton’s financial ties to foreign entities and overseas connections on the campaign trail.